King Juan Carlos of Spain on a three-day visit to the Kingdom of Saudi Arabia. 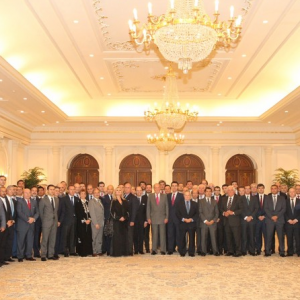 The King, together with the Minister of Industry and a large group of Spanish entrepreneurs ,at the King Faisal Royal Palace.

Spain is interested in contracts to participate in the construction of 16 nuclear reactors and infrastructures in the field of renewable energies which Saudi Arabia is to undertake between now and 2032 and which are valued at 230 billion dollars (167.6 billion euros). It is also interested in others amounting to 300 million euros in the automotive sector. At the end of the King’s visit to Saudi Arabia, the Spanish Minister of Industry, Energy and Tourism, José Manuel Soria, announced in Jeddah that an initial meeting of the joint committee is to be held in Spain in the autumn to improve the chances of participating in these multi-million contracts.

CEG is involved in different projects with spanish companies.

The Spanish Minister of Public Works, Ana Pastor, who also formed part of the delegation accompanying King Juan Carlos, announced that Spanish companies will be bidding for the construction of the rail link between the north and south of Saudi Arabia. This line will be 2,400 kilometres in length and will allow both goods and passenger traffic, according to Europa Press. If Spain were to be awarded this contract, it would strengthen its presence in the Arab rail construction market, where Spanish companies are already building the high-speed rail line from Mecca to Medina and the Riyadh metro. The high-speed link between the two holy cities, the largest project won by Spanish companies outside Spain, is a 500-kilometre project which the companies will then operate and maintain for a period of twelve years.

Copyright 2013 Frisco by CreativeSmitten
Back to Top